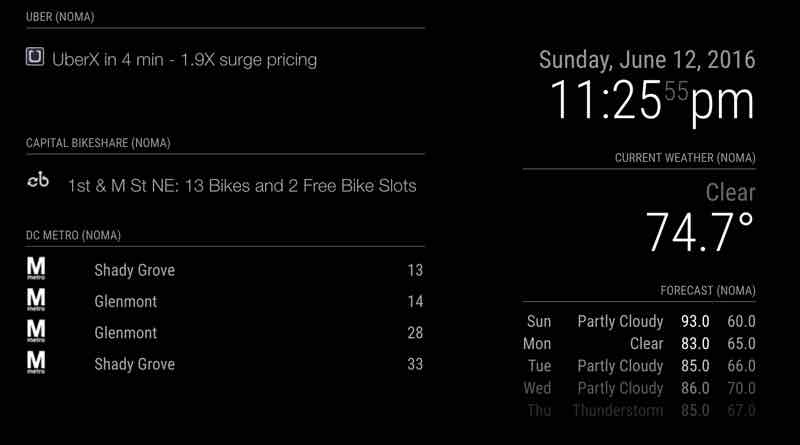 The software display of my Magic Mirror, with custom widgets.

With a number of other things behind me there is a home DIY project I want to take a crack at. A Magic Mirror is a home information display showing a clock and useful data readouts from various web services. Michael Teeuw came up with the concept and put out an open source project showing how he did it. Teeuw’s first version was a web app built to run on a raspberry pi with a local Chromium browser put in full screen mode. The pi is attached to a stripped down flat screen monitor placed behind a piece of one way mirror.

Several others followed suit making their own alterate versions including Hannah Mitt on Adafruit using a native Adroid app and an old Nexus 7 tablet. The Android looked like an attractive place to get started, expecially since I happen to have an spare Nexus 7 tablet from an old mobile web test rig. The native app gives full control over disabling power-off and full screen. Comparatively trying to get a browser on an android to be both full screen

Fast forward a few months and Teeuw has updated the code to be more modular and easy to extend as well as making it into an Electron application. This is basically a way of packaging a linux, windows, or mac standalone app using HTML, JS, and CSS rather than having to learn a platform specific web framework. I decided to go this way so that I could build skills that would stay in the ballpark of other technology projects that I want to look into this year.

I’ll go through the hardware set up with the shiny, new Raspberry Pi 3 in a future post. But my first version has a few new modules for the info that I want to have hanging on my wall by my front door:

Teeuw’s tutorial the update MagicMirror project does a fantastic job stepping a person through modifying the Rasperri Pi to disable screen savers and power saving functions as well as launching the electron app with pm2, a task persistence manager. The raspberri pi portion of the project, which I was expecting to take most of the project time, actually only took a single morning given that Adafruit packages their Raspberri Pi 3 kits with a preinstalled OS on the included microSD card.