As a new years resolution I’m embarking on a Quantified Self project.

It is known that I love tracking things. As an example: 3 years of my beer drinking history from Untappd exported to CSV as a static dataset and loaded into Kibana: 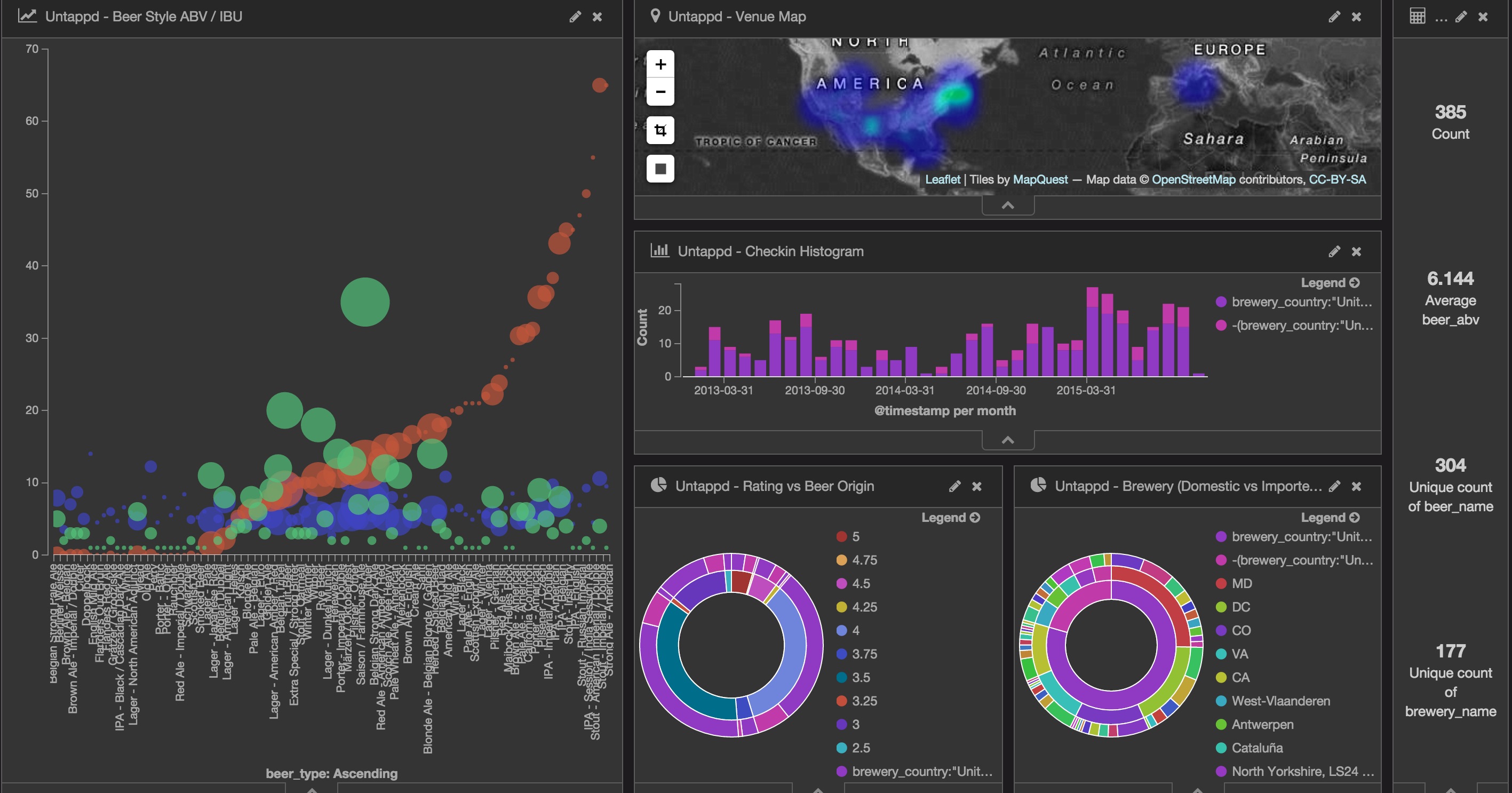 Dashboards and visualizations are fun, but in order to truly embrace life logging (and to eat a bit more dogfood at work) I need these feeds to be real time rather than static data sets manually loaded when I happen to have the time.

Last year for new years I built an infographic at Piktochart [1] to show my year’s accomplishments. This is pretty easy for me given that most of my life is recorded in a google calendar somewhere or inside a dashboard for one of the services I use like Tripit, Untappd, or Fitbit. I started a new visualization and it became really obvious that

Searching around people’s blogs and the various life logging apps, I stumbled upon a movement / fixation out there called “Quantified Self” [2] that is related to the recent tech trends of personal data, wearables, and internet of things. I found some tools that I liked, but rather than spend a whole bunch of time wrangling static data sets at the end of the year I set a challenge for myself:

I wanted to get going quickly managing real time data and building dashboards. No better tool combination than Elasticsearch and Kibana, and no easier place to host that than Found [3].

Setting up a new 1 node of the latest Elasticsearch with SSL, basic authentication, automated snapshots and the with the latest build of Kibana was point and click easy. Best part is that I’ll never have to worry about upgrade automation etc as Found handles all of that.

I actually had quite a large number of datasources already available to me, rather than start with custom API pollers I decided to build integration to tools like If This Then That (IFTTT) [4] and Zapier [5] which act as codeless service brokers on the public web. These two tools combined had out of the box integration to useful data sources and trigger management.

My top two desires for data sources were my Fitbit step counter stats and the local weather. Both occur every day and are simple to work with numeric metrics and text categories.

The problem with these ‘consumer’ oriented data hubs is that they are meant for human consumption and not clean data integrations. IFTTT added a “Maker” channel recently which allows it to make outbound REST calls, which is excellent. And Zapier has a pretty rich weather data source with a JSON output, but both offer very little in the way of transformation or normalization of things like dates, which is essential to centralized dashboarding.

To solve the problem I built a custom Heroku REST Service (code here) [6] to manage and transform my data coming from IFTTT and Zapier into Elasticsearch. I also wanted to keep a full log of all the raw data in case I changed my mind on index settings for Elasticsearch and wanted to quickly regenerate. data can be posted to /raw or /metric endpoints. /raw will just capture data that isn’t ready for centralized idnexing. /metic will both record the raw feed as well as do normalization and centralized indexing. /metricOnly will only do the normalization transform and central indexing. By doing a scan and scroll off of the raw-* index target and resubmitting data to /metricOnly the data can be quickly reindexed.

A new tool that I picked up is a custom QS app called Reporter App [7] from Nicholas Feltron, who does some pretty impressive end of year infographics [8]. It does JSON formatted randomly timed surveys using both phone entry and the various sensors on my phone. It can do live updates to Dropbox, so it would be something useful for tracking # of coffee’s, sodas, days spent working, etc for later analaysis. Also, given that the data is well formed JSON I’ll be able to rig a script to mine the dropbox folder incrementally, which will be a good task for later.

I used some gift cards from the holidays to pick up an Automatic [9] car IOT device. I’ve already got IFTTT logging car trips I make to a Google spreadsheet, I think that will be a fun one to put into Elasticsearch next.